Is This The End?

Earning your Black Belt in martial arts is considered by many to be the end of your training.  Many people believe that when someone has a Black Belt, that they have reached PERFECTION!  While a person with a Black Belt should exhibit a higher level of skill and physical and mental strength, they are not finished with their training.  This is especially true when studying our martial art, Kuk Sool Won.  There are 10 levels of Black Belt in Kuk Sool Won (10th reserved for our Grandmaster), so once you earn your Black Belt you have much to learn.  Black Belts will start progressing through our advanced curriculum and learning new and exciting things.  You could consider our Black Belt level to be a "Graduate Program" to our regular classes, focusing on more difficult and complex concepts.


The Black Belt Testing process is very important in the development of each student.  Our Grandmaster has established a specific process of testing that builds the necessary character and skill that is expected of a Black Belt.  The World Kuk Sool Association (WKSA) is the governing organization for all the Kuk Sool Won schools worldwide.  The WKSA oversees all aspects of the Black Belt Testing process to ensure that our martial art as a whole is improving.  This page should help you better understand the process and the importance of each part.﻿ 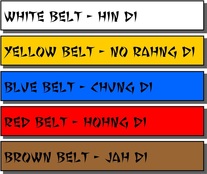 Like many traditional martial arts, Kuk Sool Won students don't just ask to be tested for their next level.  They must prove to their instructor that they are ready by how much effort they put into each class and exhibiting proper character.  After training for 2-3 years in our school, a student will have progressed through several different ranks (shown on the left) to earn their Brown Belt.  The Brown Belt student must exhibit a commitment to earning their Black Belt, a positive attitude, good attendance, and a healthy physical and mental condition before the next level.  Once this is achieved, the student will promote to the Dahn Bo Nim (Black Belt Candidate) level and be invited to start their Black Belt testing process.

Perseverance - Never Give Up!

Our school wants to see you succeed at every level of your training.  This is why we have classes for Intermediate, Advanced and Black Belt.  One of the strengths of Kuk Sool Won is the amount of learning that is still available after you earn your Black Belt.
This Certified Gracie Jiu-Jitsu Training Center is independently owned and operated. Gracie Jiu-Jitsu®, Gracie Combatives®, Gracie Bullyproof®, Women Empowered®, and Certified Gracie Jiu-Jitsu Training Center®, are registered trademarks used under license from Gracie University.